Back in summer 2015, I had the great pleasure of working with the Ipswich band The Baskervilles. The band were fairly new to the scene, but had carved a name for themselves pretty quickly off the back of their live shows and hard graft work ethic. After a meeting at the studio, both the band and me were pumped about the prospect of trying out somethin new musically. We agreed to try out one day in the studio to see where that would take us. We came out of the studio with 'Little White Dress', an alternative rock banger that told the story of chance meeting of 2 strangers; filled with induendo and clever metaphors. Their intelligent songwriting, fat grooves and penchant for a catchy hook sold me completely.

They returned to the studio a few weeks later to record the song to follow on from their single Little White Dress; Yeah Yeah Yeah. This was a real turning point for both me and The Baskervilles. We all decided to take a completely different approach to the production of the track, opting to use left field drum recording techniques, obscure digital effects, synths and vintage drum machines. The results we absolutely brilliant and equally inspiring. Unfortunately the band had a heavy gigging schedule, including a U.K. Tour, but decided that once they had completed the shows, that they would essentially shut down the band to the outside world and write an entire album, based around the new sound that we had accidentally stumbled on. They even went as far as building their own fully functional recording suite, to demo their material before hitting my gaff, which I helped them setup in December 15'.

They came back in march 2016 with the structures and back bones to the album. nd over the following 9 months we produced 8 (not I including their single for the Paix project). The album itself is kind of hard to describe, somewhere between razor sharp alternative rock and EDM, but held to together with intelligent lyrics of social commentary wrapped up in soaring meldodies.

Don't get me wrong this record wasn't the most easiest thing to make... throughout the process, despite pre production and planning, we were hit by many creative obstacles, songs were scrapped, rerecorded, and in some cases essentially remixed. But the end result was something that all 5 of us are very proud of.

From a technical point of view, each song was approached very differently. But the timeline in which the parts were recorded were the same; drum, bass, guitars and then vocals. From this point, it was everyman for himself; we threw pretty much everything at the sessions. We used various different amps, but the main contender was the Kemper; the band were lucky enough to have quite an impressive collection of modern and vintage amplifiers, and some really odd guitar effects. They had painstakingly profiled all of these into the Kemper; A/B'ing these profiles against the original setup in a blind test proved incredibly difficult to work out what was what. For the record, I personally hated Kempers up until this point... now I an convert and a true believer that these badboys are the future! Although I wont be selling any of my vintage amps any time soon, sorry.

There are a few sounds and effects that make regular appearances on this record.

First up we have the Earthquaker devices Bit Commander. In Earthquaker Devices words... The Bit Commander is a monophonic analog guitar synthesizer with four octaves of vintage square wave synth tones. In my words: its a dangerous pedal not to messed around with if you don't know what you're doing. With effects ranging from crispy digital crackles to tinnitus inducing, dog bothering square waves, that look like razor blades under an oscilloscope. As much as I love this pedal, it genuinely made me shudder with fear when Callum plugged it in. Its completely insane, but is so much fun to use. It was one of the main players in giving the album it anti-pop vibe.

This was another big player in the sound of the album; A polyphonic octave generator that enabled guitarists to conjure everything from the surreal jangle of an 18-string guitar, to rich, thick walls of symphonic sound. Singer James Betts used this extensively on his guitar tracks. For me I saw this as the antidote to the Bit Commander; its Ying to the Bit Commanders Yang if you will. It provided a serious weight that almost felt like the guitar amp was prolapsing. Love this pedal! and I'm seeing more and more people pass through the studio with one of these attached to their board.

This plugin popped up as a suggested post on my Facebook news feed, pretty much when I started on this record... I'm glad it did. My life hasn't been the same since. From subtle reflections to 50 second self modulating soundscapes, there is nothing that this verb cant give you when you're looking for a bit of inspiration. This is on every track and pretty much every other track I've worked on since I purchased it in '15. Valhalla VintageVerb is a postmodern take on the classic digital reverbs of the 70s and 80s, but thanks to modern DSPs and uber fast CPU's, this plugin takes verbs way further than I thought they could go. This is a must have for anyone that likes to trip balls when they're making a track.

When we looked for a sound or effect that sunk the track into a slush of digital insanity, the KP3 was pretty much the one we always turned too. We used it for delays, reverbs, glitches and loops. Probably one of the most exciting and unique effects in my studios arsenal of sonic weapons.

My good friend Ed Woods handled mastering duties on the record, and managed to retain the dynamics and the incredibly broad frequency range of the tracks... the ear bleeding high end of 8bit guitar effects and the bowel shifting load of the low tuned 808 kicks meant the there was a worry that the tracks may cause fatigue to the listeners. But throughout the entire production process this was taken into careful consideration and ha given us a sound that is full, rich and full of character.

Shortly after completion of the album, The Baskervilles signed their first record deal with Regent Street Records and have now released the first of many self produced videos from this. I've been lucky enough to have a sneaky peak at some of the videos and promotional material they have ready; it's pretty amazing. Anyway, go check these guys out, buy the record, go to their show and then tell all of your friends about them and make them do the same.... but for now, check out the video for the new single Death Of A Pop Song from their forthcoming album. 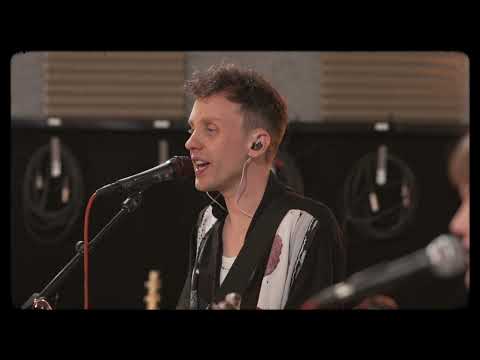